Andre was born in South Los Angeles in the year 2000. He was a student at Daniel Freeman Elementary when “I Have A Dream” Foundation – Los Angeles (IHADLA) sponsored his 3rd-grade class (Program 16), and he became a Dreamer Scholar. Growing up, he says, “I had a hard time being myself. I always wanted to be in the mix and always followed others that weren’t doing well.” Andre shared that by the time he got to middle school, he decided to take charge of his life and lead instead of following. Being part of IHADLA, he says, inspired him to develop “a growth mindset which resulted in my having that leadership mentality.” High aspirations, along with valuable college and career readiness programming offered by IHADLA, like SAT prep, personal statement workshops, and mock interviews, strengthened Andre’s academic performance and permitted him to feel confident in his work and successfully matriculate. 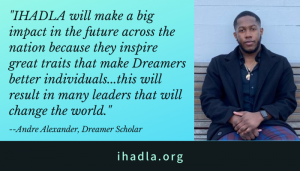 Andre’s greatest inspiration and motivation for pursuing higher education are his mother Ashanti and his grandfather Freddie, both of whom he stated are “hard-working individuals who have made sacrifices so that I can be great.” Currently, a Sophomore pursuing a Marketing degree at CSU East Bay, Andre is also employed as a Sales Representative at AT&T. He credits IHADLA for his high-achieving “work ethic and that giving back mentality to those who may not have what they need.”

Networking brings leadership to life and is an invaluable component that IHADLA provides to Dreamer Scholars as they prepare for their futures. As Andre attested, “something that I would have not been exposed to is the people I’ve met in different industries. Networking really expands your view on life and exposes you to many opportunities.” One pivotal experience that comes to mind for Andre is when he attended the 15th annual “I Have A Dream” Foundation “Dream UP” (University Prep) Conference at Loyola Marymount University (LMU) in 2017 when he was in the 10th grade. “My favorite memory would have to be the LMU conference because of the different Dreamers I met from across the world. This showed me there’s more to it than just California, and connections can take you a long way.” Over 100 Dreamer Scholars from eight states, ranging from 7th grade to college level, participated in that college immersion program, which offered a week of workshops, discussions, service learning, and team-building opportunities.

Andre is optimistic about our organization’s continued influence on the leaders of tomorrow and stated that “IHADLA will make a big impact in the future across the nation because they inspire great traits that make Dreamers better individuals. In the future, this will result in many leaders that will change the world.” Andre hopes to remain involved with IHADLA as a future Mentor.