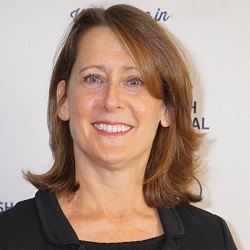 Pamela Miller has held senior-level television business and legal affairs roles at major media companies–ABC, CBS and Discovery–for over 20 years. In those roles, she oversaw the negotiation and drafting of deals for broadcast network, syndication, and cable marketplaces for scripted, unscripted, kids, made-for-tv movies, news, and sports programming for distribution domestically and internationally.

Ms. Miller retired from the entertainment industry several years ago and has pursued full-time philanthropy as a board member, volunteer, and professional. She has served on the Boards of The Baseball Network, The California Dance Institute, and The ALS Association, Connecticut Chapter. She also volunteers as a mentor for College Path LA.

Ms. Miller was most recently Director of Major Gifts for the Greater Los Angeles Area for the Jewish National Fund. Prior to that, she was an independent business affairs consultant for major television studios, networks, and independent television producers, including A + E Studios, Lifetime, History Channel, among others. Ms. Miller started her career as an Associate in the real estate department of Gaston & Snow, based in New York City, where she handled commercial real estate transactions including foreclosures, acquisitions, construction, and financing transactions.