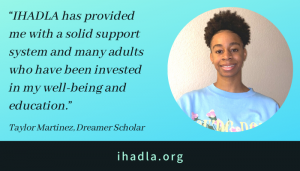 Taylor Martinez was in the second grade at Daniel Freeman Elementary School in Inglewood when she first joined IHADLA and became a Dreamer Scholar in 2009. Taylor was inspired and motivated to apply to college when she attended her own mother’s college graduation as a child. She is now a Junior at the University of Southern California (USC), double majoring in Cinema and Media Studies and African-American Studies, graduating in May 2023. In addition to being a full-time student, Taylor works part-time as an Office Assistant at USC’s Cinema and Media Studies Department.

Growing up, Taylor faced many of the difficulties and challenges of being raised in a single-parent household by her mother, while trying to stay connected with her father and half-siblings. But she says that being part of IHADLA “has been beneficial to my life in making friends who’ve turned into a second family” due to the long-term nature of the program. “IHADLA has provided me with a solid support system and many adults who have been invested in my well-being and education.”

Taylor shares that one of the experiences IHADLA exposed her to, that she may not have experienced otherwise, is traveling to visit colleges outside of California like the University of Colorado Boulder and the University of Washington. “Visiting Colorado for the Dreamer Conference helped me build better connections and bond with other Dreamer Scholars,” she added. Furthermore, one of her favorite experiences growing up with her IHADLA family was going to the Loyola Marymount University basketball games because she got to spend time with her program friends outside of a school setting.

As for the role she thinks IHADLA will play in shaping the future of her community, “I think IHADLA will convince more people who might’ve not had the opportunity to attend college, or been told that it was a possibility, to do so and succeed.”