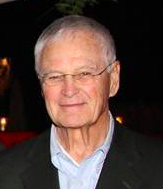 In 1972, Wertheimer went to work for MCA, Inc., where he served as Executive Vice President, Director and member of the Executive Committee.  At MCA, his responsibilities included worldwide television production and distribution (pay, cable and free), home video, MCA’s interest in the USA and SciFi Channels, as well as Legal, Labor Relations, Internal Audit and Human Resources. Wertheimer stepped down in 1995 after the sale of the company to Seagram. From 1995 to 2009, he was a non-exclusive consultant to NBC Universal and others.

Wertheimer has served as a Director of four public companies: MCA, Pinelands, 4MC and Macrovision. Wertheimer’s non-profit activities include the following: 1. Long-time Board member of the KCRW Foundation which he chaired for six years. 2. Trustee of Research to Prevent Blindness. 3. Six years as a member of the Columbia Law School Board of Visitors . 4. Board member of “I Have a Dream” Foundation – LA.

He has guest lectured at UCLA Law School and more recently served as co-executive producer of two made-for-cable movies. He continues to occasionally serve as a media consultant and executive producer.

He and his wife live in Santa Monica, California. He has two children and six grandchildren.